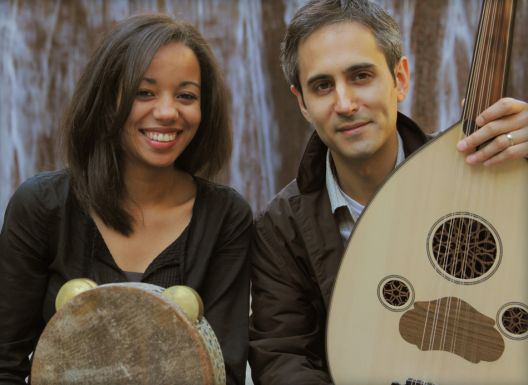 Seffarine CANCELLED DUE TO THREAT OF CORONAVIRUS

Concert Details: Described as "A Treat for the Ears," Seffarine's international blend of sounds feature soulful Moroccan vocals and flamenco guitar. Their Music embraces the rich Moroccan heritage and spans from Moorish Spain to the Sahara. Seffarine's broad, intoxicating blend of ancient and modern sound incorporates world cultures into a unified, fresh and expressive voice, full of color.

Performer Bio: lamiae Naki (vocals) ws born in the city of Fes, the historic cultural capital of Morocco. Fes'medina or old waled city is the biggest in the Arab world and is a UNESCO world heritage site. It is the only functioning medieval city and also the home of the oldest continuously running university in the world. As a enter for learning in the Arab world one can hear in Fes classical Arabic music as well as every kind of traditional Moroccan music. Sufi music, Andalusian music, pop, jazz and hip hop. She was drawn to music from a young age and began singing, writing songs a d using every resource to find new music and influences from widely varying cultures. Lamiae studied Andalusian music and other forms of classical Arabic music in Fes, and has continued to creatively apply her expertise in Moroccan and Andalusi music to many other traditions. She has performed in concerts in the US, Morocco, Canada, Indonesia and Turkey. Lamiae has also been featured on recordings such as "Hora de Sonar" by Martin Zarzar of the world renowned group Pink Martini and the soundtrack for the film by Alissa Cramer "No Plorar Mai" (USA/Spain;Angola). In 2012 she was awarded a grant from the Regional Arts and Culture Council to travel to Istanbul, Turkey to study classical Turkish singing with master singer Aylin Sengun Tasci. Lamiae now resides in Portland, OR.

Nat Hulskamp (flamenco guitar/oud) was born in Portland, OR. He began studying guitar with guitarist/composer Paul Chasman at age 17. He was soon introduced to flamenco guitar by Jose Solano. His interest in the influence of Arabic music on flamenco led him to study oud in Morocco. After returning to the US, he moved to Seattle to study ethnomusicology at the University of Washington. There he worked with the groups Carmona Flamenco, The Rez Quartet and others ranging in style from Hungarian Csardas and Gypsy swing to flamenco. In 2004 he moved to Portland and formed the group Shabava with kamancheh/shtar/violinist and singer Bobak Salehi. Nat has studied with the top flamenco guitarists of today including, Diego del Morao, Manuel Parrilla, Pepe del Morao, Jose Antonio Rodriquez and Dani do Moron. In 2012 Nat received a grant from the Regional Arts and Culture Council to travel to Jerez de la Frontera, Spain to continue studying flamenco guitar with the Morao family. He now resides in Portland, composing and performing with Shabava, Caminhos Cruzados and Seffarine.

They are joined by versatile drummer from Madagascar Manavihare Fiaindratovo.